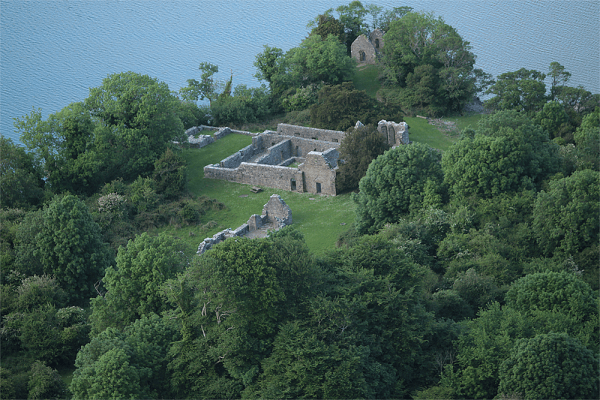 Innisfallen Island which sits approx 1 mile offshore from Ross Castle is home to the ruins of Innisfallen Abbey. An island of approx 21 acres (8.5 hectares) it is the largest of the islands on the lake and can be accessed via motor boats which run from Ross castle during the summer months.

Some of the most impressive archaeological remains from early Christian times to be found in the Killarney region are to be found in the ruined monastery on Innisfallen Island. The monastery was founded in the 6th/7th century by St.Finian the Leper. In the 6th/7th century the island would have been a bleak and desolate place (it still is on a winter's day in the 21st century) ideally suited to the life of life of solitude, prayer and reflection sought after by the monks of those times. The monastery founded by St. Finian flourished over the following centuries and writing and education became synonymous with the island and the monastery.

Over the following hundreds of years “the annals of Innisfallen” were written here by some 39 monks and detail the early history of Ireland written in a combination of Irish and Latin. The Annals are considered of major importance by historians and can be found today in the Bodleian library in Oxford.

It is a peaceful spiritual place, with a lingering sense of contemplation and stillness. While you will pay a fee for a boat to get you out there it is well worth it.