County Kerry is located in the south west of Ireland in the Munster province. Dingle Peninsula’s tip is the most westerly point of Ireland and also Europe. With some of the most hilly terrain on Ireland, Kerry has two of Ireland’s three highest mountains, Carrauntoohil and Mount Brandon. You could take a nice bike ride on the Ring of Kerry on the Iveragh Peninsula, or take a trip to see some fantastic natural scenery by the Lakes of Killarney which are found in Killarney National Park.

The Ring of Kerry Cycle Route is in an area known throughout the world for its archaeological treasures, breathtaking scenery and charming hospitality. The route travels along quiet country roads where possible and passes through all the main towns and villages along the way.
The entire journey is 216km (134 miles) with 74km of the route on the main road and 143km of the route on minor roads.
The route should ideally be cycled in a clockwise direction for safety and spread over a week in order to fully appreciate the relaxing atmosphere and magnificent variety of scenery. Cyclists should remember that some sections of the route are high and exposed and even in the summer months they should take note of the weather forecast and take suitable clothing and supplies.

The Ring of Kerry Cycle Route is divided into seven sections. The route starts in Killarney but of course it can be joined at any point.

Certainly over the last couple of months the cyclist has gotten a bit of a raw deal from mother nature. What with the likes of Barney, Desmond, Frank and a whole host of their relatives queueing up in the Atlantic to give us a pounding, they have had to wait patiently by the fire side for a break in this relentless wet and windy weather. 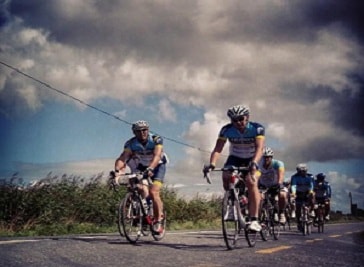 Kerry Crusaders CC was formed in 2012 and is based in north Kerry with over 60 members at present. They are a leisure cycling club who participate in numerous sportives and charity cycles throughout the year. For our own sportive the “Scenic Challenge”, this year they had international charity “Orbis” as their benefactor.

~Things to Do in Kerry~