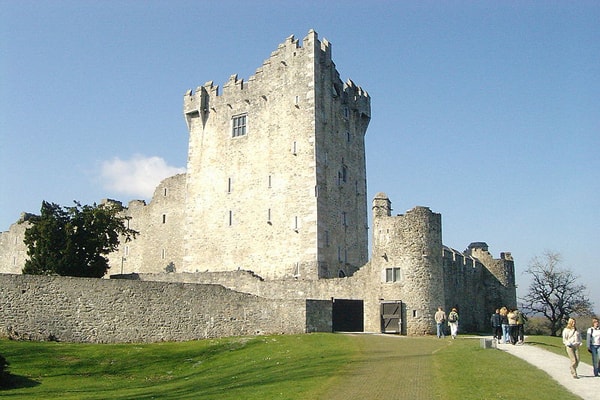 Ross Castle is a 15th century tower house and keep on the edge of Lough Leane, in Killarney National Park, County Kerry, Ireland. It is the ancestral home of the O'Donoghue clan, though it is better known for its association with the Brownes of Killarney who owned the castle until more recently.

The castle is operated by the Office of Public Works, and is open to the public seasonally with guided tours. Ross Castle was built in the late 15th century by local ruling clan the O'Donoghues Mor (Ross), though ownership changed hands during the Second Desmond Rebellion of the 1580s to the MacCarthy Mór. He then leased the castle and the lands to Sir Valentine Browne ancestor of the Earls of Kenmare. The castle was amongst the last to surrender to Oliver Cromwell's Roundheads during the Irish Confederate Wars, and was only taken when artillery was brought by boat via the River Laune.

Ross Castle perches in an inlet of Lough Leane. It is likely that the Irish chieftain O’Donoghue Mór built it in the fifteenth century.
Legend has it that O’Donoghue still slumbers under the waters of the lake. Every seven years, on the first morning of May, he rises on his magnificent white horse. If you manage to catch a glimpse of him you will enjoy good fortune for the rest of your life.

Ross Castle was the last place in Munster to hold out against Cromwell. Its defenders, then led by Lord Muskerry, took confidence from a prophecy holding that the castle could only be taken by a ship. Knowing of the prophecy, the Cromwellian commander, General Ludlow, launched a large boat on the lake. When the defenders saw it, this hastened the surrender – and the prophecy was fulfilled.