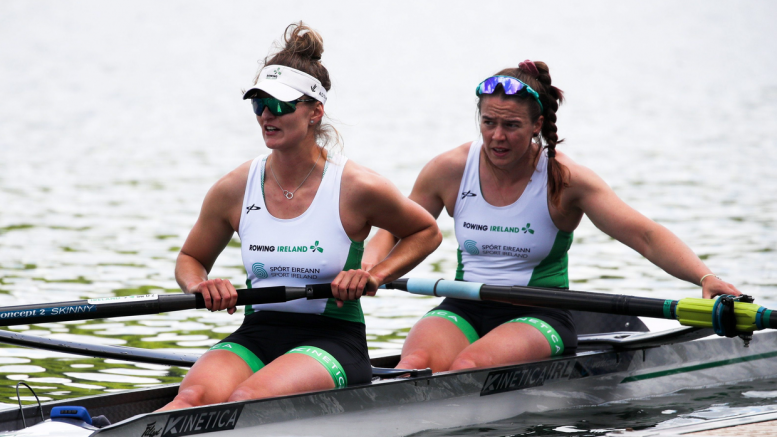 There was great excitement in sporting circles in Kerry this week following the success of Killorglin rowers Aileen Crowley and Monika Dukarska, who claimed a silver medal at the World Cup II rowing championships in Lucerne on Sunday afternoon.

his follows on from their success at the European Championships in Varese, Italy, in recent weeks, where they qualified for the A final – no mean achievement in itself.

Both Aileen and Monika, who began their careers rowing right here in Kerry, are fast becoming two of the county’s rowing heroes, and it is hoped that they may yet be on the Irish Olympic team, if the Games go ahead this year.

The team has not yet been named, but it is likely the Kerry heroes could be on the plane to Tokyo this summer.

Both girls are thrilled with this week’s win, and so too are their families and the community in Killorglin.

“I am delighted, it’s been a long time coming, but yeah, I’m thrilled. We had a really good race with it, which makes it feel even better,” Monika told The Kerryman this week.

Cllr Michael Cahill said this news of a silver medal for our rowers has lifted spirits across the county.

“This is a stunning win by Monica and Aileen, and it will lift the hearts of everybody in the county, not to mind the people of Killorglin and Mid-Kerry. I offer my heartfelt congratulations to them both, to their coaches, to their families and to Killorglin Rowing Club on the banks of the Laune,” said Cllr Cahill.

“This kind of a lift is badly needed by us all in these unprecedented times,” the Fianna Fáil Councillor added.

Both girls have rowed with Killorglin Rowing club and attended school locally as well as living locally.

In recent months, they have been undertaking intensive training, and this training routine is continuing despite their recent win.

The duo now have three weeks at home before heading to another training camp for three weeks.

Though there are currently no plans for a celebration for the two Kerry rowers, given the situation with the pandemic, they may, in the future, receive a well-deserved welcome home to Kerry to honour their achievements.