Callum Wilson paid off another instalment of his £20million transfer fee with a double to hand a Premier League victory for Newcastle over Burnley on a rain-soaked Tyneside.

The former Bournemouth striker, whose stoppage-time penalty secured an unlikely draw at Tottenham on Sunday, struck with 65 minutes gone and then converted a 78th-minute spot-kick to fire the Carabao Cup quarter-finalists into the top six after four games.

Allan Saint-Maximin had given the Magpies a 14th-minute lead and it was he, after the rallying Clarets had levelled through Ashley Westwood’s sweet volley, who provided the ammunition for Wilson to claim his third goal in four league games before the England international added his fourth to seal a 3-1 win.

Steve Bruce’s men were good value for the points on a night where they started and finished well at the end of a week which had seen them come in for stern criticism, but Burnley remain pointless after a difficult start to the campaign.

Wilson charged down an attempted fourth-minute clearance by goalkeeper Nick Pope in an early signal of intent, but the hosts were almost caught on the break when Ashley Barnes, making his first league appearance for nine months, fed Dwight McNeil and forced a seventh-minute save from Karl Darlow.

The Magpies took the lead with 14 minutes gone seconds after Wilson had rounded Pope from Jonjo Shelvey’s fine long pass, but had been unable to get in an attempt from a tight angle.

Wilson laid off Darlow’s clearance to Saint-Maximin, who twisted and turned on the edge of the area before drilling a right-foot shot into the bottom corner.

With Saint-Maximin, Wilson and Joelinton combining well, Newcastle continued to pose a threat, although the physical presence of Barnes and Chris Wood at the other end meant there was no room for complacency.

Wilson glanced a header wide from Shelvey’s cross on the half-hour mark when he might have done better and although Barnes saw a 35th-minute strike correctly ruled out for offside, the home side finished the half on top amid some less-than-assured defending from the Clarets.

Darlow did well to parry Wood’s 52nd-minute header before Emil Krafth had to dispossess the same man before he could shoot two minutes later with Burnley enjoying their best spell of the game.

It was Westwood who finally restored parity after 61 minutes when, after his corner had been recycled by Josh Brownhill, he met Phil Bardsley’s cross with a stinging volley which screamed past Darlow.

However, Newcastle were back in front within four minutes when Saint-Maximin left full-back Charlie Taylor for dead down the right and crossed for Wilson to stab home from close range.

He helped himself to a second from the penalty spot with with 12 minutes remaining after substitute Ryan Fraser had been tripped by Pope as he attempted to atone for a dreadful touch on a back pass. 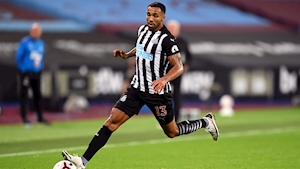