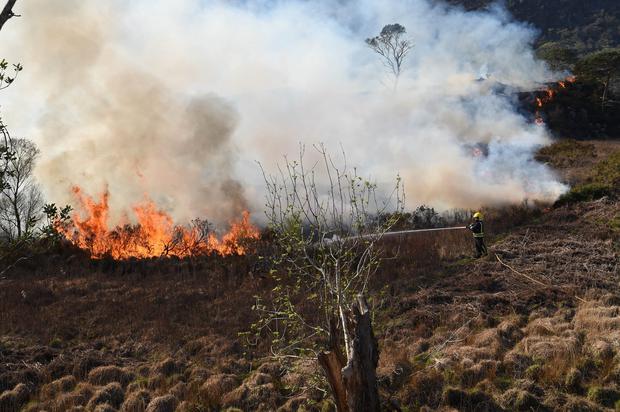 The utter devastation caused by the fire that ripped through Killarney National Park last weekend will never be forgotten as fire crews battled the blaze for four days to get it under control. They were assisted by the Air Corps and a private helicopter, both dropping thousands of litres of water as fire crews pumped water from the lakes to halt the spread of the blaze.

he fire first ignited near Dinis but high winds and extremely dry conditions led it to blaze across the park to the Eagle’s Nest, along the top range to the Purple Mountain near the Gap of Dunloe, and downwards towards Tomies, where Oak woodland came close to destruction.

“We were lucky. There is a stream separating her property. We did get a fright; we could see the flames coming and it came quickly.

“You often watch TV and see the devastating fires in California, and you think they got caught out. It wasn’t until last Sunday that I saw how fast fire moves,” he added.

Luckily, the fire service put the fire out at the stream, but it was such a close call that ashes landed on their cars and smoke filled the house.

Killarney, Sneem and Kenmare fire personnel fighting the flames in Killarney off the main Kenmare Road on Saturday. Photo by Michelle Cooper Galvin

Killarney, Sneem and Kenmare fire personnel fighting the flames in Killarney off the main Kenmare Road on Saturday. Photo by Michelle Cooper Galvin

The fire burned water pipes in nearby houses leaving five homes in the Black Valley without water and fears are mounting about the local water supply as a downpour will bring ashes and smoke into the river and stream, potentially leaving water undrinkable and destroying water filters.

“This is the aftermath of this,” said Michael who said he could not believe how much of the landscape burned over four days.

Killarney Water Rescue, An Garda Siochána, the Air Corps and the National Park and Wildlife Service staff in Killarney all worked to try and save much of the park for almost four days in what has been the area’s worst fire since 1984 when flames burned for six days.

Though it remains unknown what caused the fire, there are demands for a full investigation into the incident by the Gardaí and the NPWS. Unsubstantiated reports believe it may have been embers of a campfire or BBQ. Farmers are not thought to be involved given the starting point.

The scale of the damage has not yet even been fully assessed but almost 3,000 hectares have been damaged out of the national park’s 5,000 hectares.

“First-hand reports from those involved in fighting the fires, and photographic coverage and video footage showing large sections of our iconic Killarney Park ablaze, have been difficult to digest and the whole episode is extremely distressing,” said Killarney Chamber President, Niall Kelleher.

“Killarney National Park is the jewel in Ireland’s tourism crown and the impact the fires have had, causing extensive damage to approximately one half of the park, scorching the land and decimating wildlife, including rare and important habitats and species, has been met with shock and dismay by everybody.

More than 40 firemen from crews across the county battled the blaze from around 10.30am on Friday night non-stop until Monday around 12.30pm when it was finally brought under control. Macroom Fire Service was drafted in to help and extra helicopters on Sunday were also called. These helped for a number of hours but had to attend other calls on Sunday.