United started on the front foot against Sevilla and, just like Wolves on Tuesday, drew an early penalty.

Anthony Martial’s smart dragged pass put Marcus Rashford through to get away a shot, before being thumped by Diego Carlos.

The reported Liverpool target also gave away Tuesday’s spot-kick but this time Sevilla goalkeeper Yassine Bounou could not save, with Bruno Fernandes putting his eighth minute penalty out of reach in the top left corner.

Brandon Williams was booked for a challenge on Joan Jordan to the audible frustration of all those connected to United, leading United coach Michael Carrick to bellow at his players to “keep our head”.

Carlos followed him into the notebook and the Sevilla centre-back could count himself fortunate that it was not a second booking, having avoided a yellow card for his foul on Rashford.

Play built down the left and Sergio Reguilon crossed to the far post where Suso was free to net his side’s opening goal in the 26th minute, sending the Spanish contingent wild in Cologne.

United players were furious that the play came from a throw-in that was wrongly awarded to Sevilla, but it was out of the video assistant referee’s hands.

United flew out of the blocks when play resumed, with Bounou single-handedly keeping Sevilla level.

However, the Spanish side managed to put themselves ahead, with a goal from substitute Luuk De Jong in the 78th minute leaving United with a hefty task to claw back an equaliser. 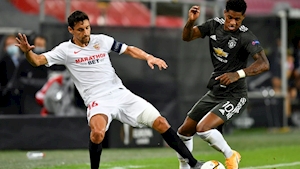