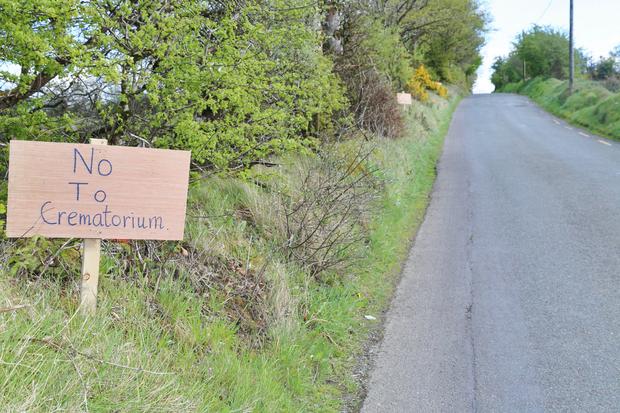 Plans to develop a crematorium – the first in Kerry – in the rural east Kerry village of Gneeveguilla will be met with resistance from some in the local community.

ithin just days of the erection of a site notice to develop a crematorium at the brown field site in Reanasup, signs opposing the plans have already been erected close to the proposed site.

The planning notice states Funeral Gardens of England (Ireland) are applying for the construction of a crematorium in the rural village, along with associated works for such a development including a waste water treatment plant and vehicle parking.

The planning application for such a development in Kerry and in Gneeveguilla has come as somewhat of a surprise for the local community, given its rural location.

There has been no public consultation with the local community and, though there is likely to be some support for such a development in Kerry for families who wish to cremate their loved ones, there is already opposition to the proposal within the local community. Several signs ‘No to Crematorium’ are now in place, kick-starting what will be a lengthy planning battle, given similar campaigns around the country.

One of several signs that have been erected at the site of a proposed crematorium at Reanasup, Gneeveguilla. Photos by Sheila Fitzgerald

One of several signs that have been erected at the site of a proposed crematorium at Reanasup, Gneeveguilla. Photos by Sheila Fitzgerald

Local councillor Niall Kelleher said he had been contacted about the proposals by concerned locals. He said more information is needed on what the plan will entail. According to the site notice, the works will include the demolition of an existing house, outbuildings and yard and the development of a new entrance and exit at the site, which was a former farm.

A Natura Impact Assessment will be undertaken on the site. Concerns have been raised about the remoteness of the location, which is approximately 1km south of Tureencahill National School, on the Rathmore Road. It is also close to the River Blackwater, another issue of concern as it is a Special Area of Conservation (SAC). The development is also not far from Munster Joinery, which employs around 1,000 people.

An application for such a project for North Cork has been extremely controversial with more than 50 submissions made on the first planning application lodged. Two further applications have since been lodged by the developers behind the project,Whitegate-based Classic Lodges (Ireland) Ltd, after their original application was shot down by both Cork County Council and An Bord Pleanála.

The North Cork crematorium is planned for Duhallow Park Hotel at Dromcummer Beg, Kanturk, on the busy N72 Mallow-Killarney road.

The previous application was refused based on concerns about traffic and the River Blackwater both of which will also be concerns in the Kerry project.

A decision is due on the current application on May 17. Deadline for submissions was April 26.

Currently there are six crematoriums in Ireland. Little Island in Cork and Shannon Crematorium in Clare are both used by Kerry families.

Once planning is officially lodged the public can make their submissions on the project with Kerry County Council.