After a battling performance, Shamrock Rovers prevailed against Finnish opponents Ilves in a mammoth penalty shootout.

It finished 12-11 to Rovers, their penalty joy came as rivals Bohemians lost out in a shootout earlier on in the evening.

Rovers went behind early on as Ilves took the lead from the penalty spot after nine minutes following a Joey O’Brien handball.

The hosts were back in it after 14 minutes after a cracking finish from the edge of the box courtesy of Graham Burke.

Despite some great play from Rovers, much of which Jack Byrne was at the centre of, it was Rovers who went behind again on the hour mark.

Another edge of the box strike shocked Rovers, this time from Joona Veteli. It looked like they were heading for defeat but Roberto Lopes was the hero with just 18 minutes of normal time left on the clock as he forced a low corner home with a drilled finish.

Rovers were dealt another blow three minutes before the end as Liam Scales picked up a second yellow card.

Both sides looked tired in extra-time and Rovers had to fight hard with ten men on the pitch.

After a mammoth penalty shootout that went well into sudden death, it was Rovers who came out on top with O’Brien scoring the winner after a crucial Alan Mannus save. 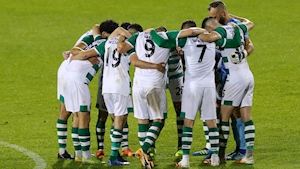