Republic of Ireland skipper Seamus Coleman has insisted new manager Stephen Kenny has nothing to prove to his players as he prepares to send them into battle for the first time.

Former midfielder Jason McAteer suggested some members of the squad might question the pedigree of a manager who has previously plied his trade largely in the League of Ireland.

However, Coleman was adamant a man who guided Dundalk to the group stage of the Europa League before taking over the national Under-21s side can allow his record to speak for itself on the eve of his first game as Ireland boss in Bulgaria.

Speaking at the pre-match press conference at the Vasil Levski Stadium in Sofia, Everton’s former Sligo Rovers defender said: “I came from League of Ireland and the job the manager did with numerous teams, but especially Dundalk, getting to the group stages and nearly getting out of the group stages, caught the interest of all the international players.

“The job he did with the Under-21s was exceptional too. There is always going to be people with opinions, but I don’t think the manager needs to answer any on that, his record speaks for itself.”

Kenny will launch his reign with Nations League fixtures against the Bulgarians and Finland, who head for Dublin on Sunday, although next month’s Euro 2020 play-off trip to Slovakia will not be far from the minds of those involved.

Coleman, who took over the captain’s armband at Euro 2016, is keen to repeat the experience and is well aware of exactly what is at stake with the Aviva Stadium one of the host venues for the finals.

He said: “Slovakia is massive for us. We all want to play in the European Championship in front of our own fans.

“These two games are a chance for us to impress the manager as best we can and be as well prepared for that Slovakia game because at the end of the day, there is no better feeling than being at a major tournament – and with it being in Dublin as well.” 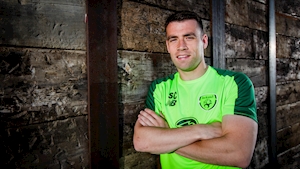 Strong start not enough to see United past Sevilla