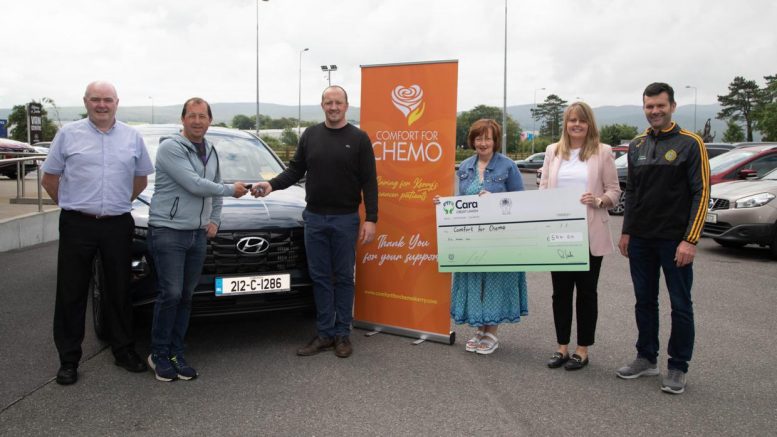 A fundraiser organised by Lixnaw GAA to help with the costs of installing a new astro turf pitch and a ball wall at their grounds has this week been hailed as a huge success.

he fundraiser, which was launched in February of this year, offered entrants the chance to win a brand-new Hyundai Tucson, courtesy of Adams of Tralee.

It’s been a hectic few months since it launched, with support for the club flooding in from all corners of the county and even further afield. It all came to a glorious conclusion this week as Pat Looney from Cobh was named as the recipient of the new set of wheels.

Speaking to The Kerryman this week, Fergus Fitzmaurice, the Fundraising Committee Chairman, said that the club was thrilled at how well the campaign had gone and said that the club hopes to begin the construction on the new pitch and ball wall in March or April of next year.

“It was a fantastic success,” said Fergus.

“We launched it on Valentine’s weekend, and we had the draw then on the June bank holiday, and we were just overwhelmed with the support from the local community and the people of Lixnaw. It’s not every day that you get the chance to win a car” Fergus added.

“The greater north Kerry area and, obviously, throughout all of Kerry and even Ireland, we were just astounded with the amount of support that we received from people buying tickets, and businesses that sponsored us as well. The support in general was just fantastic,” he continued.

The club has applied for Sports Capital Grant Funding and, through this and the money raised by the fundraiser, Fergus said that Lixnaw hopes to develop an astro turf pitch with a ball wall at its grounds at Hermitage Park in Lixnaw.

“It will enhance the GAA but the greater Lixnaw community too as both young and old will be able to make great use out of the facilities when they are up and running,” he said.

“We are hoping to commence the construction of it in March or April of next year, so we’re very excited,” Fergus added.

As for the lucky winner, Pat, Fergus said that he was very happy to see the car to go to a strong GAA man such as Pat, who is entrenched in his local GAA scene in Cobh.

“He saw the fund-raiser through one of our social media posts and, so, through the power of the internet, he entered it and, now, he’s got himself a new car. He was delighted with it,” said Fergus.

Speaking to The Kerryman as well this week, winner Pat said that it was mainly his family’s love of hurling that prompted him enter the fundraiser, and he couldn’t believe it when he got the call to say that he’d won.

“My daughter, she follows him on Instagram I think it is, so she pointed out that it was such a good deal.

“Thanks then to the lockdown and all that, we were kind of sitting at home there in March or whatever, and sure we said that we may as well throw our hat in the ring for it.

“I got the call then on the day of the draw that I’d won it, but we were watching the draw live on Facebook as it happens too. I couldn’t believe it,” said Pat.

“I’ve just got it and I’ve already brought it back around Kerry,” said Pat

Lighting up for rare disease