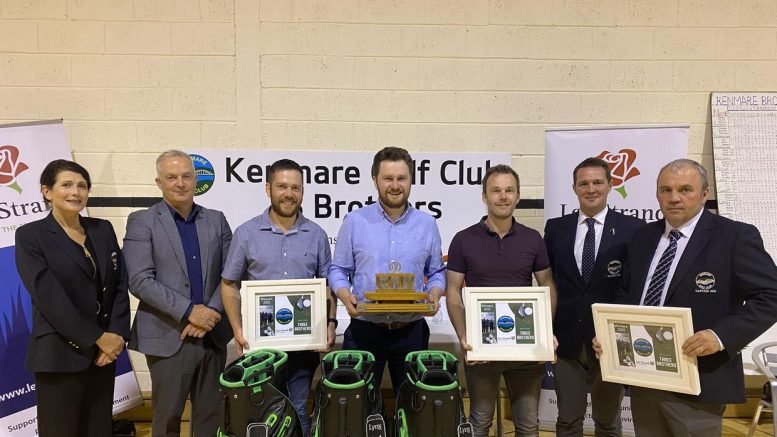 The O’Sullivan brothers – Micheál, Aindriú, and Colm – were this year’s winners of Kenmare Golf Club’s signature tournament, the Three Brothers classic, and in doing so they become the first winners since 2019.

ast year’s tournament did not take place due to the COVID-19 pandemic, but there was no stopping this year’s edition, the 43rd since it began in 1978, even though the club’s clubhouse remains out of action for the moment following a fire there last summer.

The Lee Strand-sponsored event’s smooth running was ensured by Kenmare Shamrocks GAA club making its facilities available to the golf club, and it further underlined that this tournament isn’t just part of Kenmare Golf Club – it’s a part of the town.

“[We were] Delighted with the venue thanks to Kenmare Shamrocks, and the help from the entire town,” said tournament director Johnny Allen. “Without the support we get, it would not be possible to run this competition.”

The O’Sullivan brothers won by adding a solid second-day score to their sterling first-day efforts. This was enough to edge out the O’Shea brothers by three points, 180 to 177. The Mac Gearailt brothers finished third with 172 points.

John Reen won the raffle for a Scotty Cameron putter.