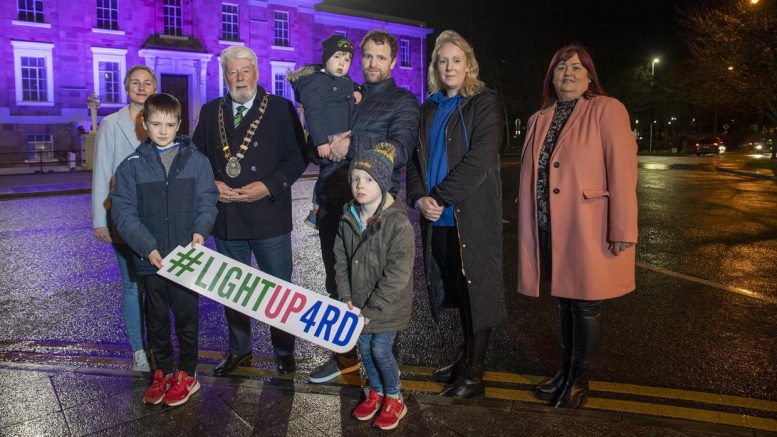 FAMILIES and individuals from Castleislan d to Tarbert and Tralee came together outside an Ashe Memorial illuminated in purple earlier this week as they marked a day in the calendar of deep significance to their lives.

or the one commonality bringing them together was the fact that each are living with the demands of rare disease; and they stood before the Ashe in celebration of Rare Disease Day 2022.

It’s an occasion that affords them a vital chance to raise awareness of a host of genetic and other medical conditions that, when combined under the one umbrella are shown as anything but rare.

And on Sunday they urged the Kerry public to mark the occasion by lighting up for rare disease or raising a toastie for rare disease (using slogans #lightup4RD and #raiseatoastie); the latter flagging the effects of the condition PKU.

Two of the families gathered know the reality of PKU only all too well; the Kelly family from Castleisland and the Conway family from Tralee (pictured right).

The main organiser of the event wasTralee-based Bernadette Gilroy, the Chairperson of the PKU Association of Ireland and a member of the National Rare Disease Taskforce Member.
Bernadette explained that the Raise a Toastie campaign is to highlight the incredibly stringent dietary requirements PKU sufferers must meet to avoid very serious health consequences.
Over 800 Irish people (1 in 4,500), live with Phenylketonuria, to give it its full name, today, which is one of the highest and most severe occurrences in Europe.

“The PKU community stands together with the Irish rare disease community to celebrate Rare Disease Day 2022 and raise awareness and understanding for the 300,000 people living with rare disease in Ireland today,” Bernadette said.

Earlier diagnoses are crucial, she said:

“Many within the rare disease community need access to an earlier, faster and an accurate diagnosis and lack access to innovative medicines. Many conditions are genetic in origin and this requires the establishment of a fully resourced Genetic Service in Ireland. A holistic approach to care necessitates patient and family engagement at all levels to enhance the quality of life of the rare disease community.”

Well-known Tralee business person Margaret Brick was also present on Sunday, sharing some of her experience living with Chiari.

Chiari malformation is a condition in which the lower part of the brain, called the cerebellar tonsil, herniates down through the skull and into the spinal canal.

The herniated tissue blocks the normal flow of cerebrospinal fluid (CSF). Instead of moving in an easy, pulsating movement through this opening, the fluid begins to force its way through pushing the tonsils down even farther. The blockage can cause a build up of fluid in the spinal cord (syringomyelia).

Margaret said rare disease is also a reality for many adults: “People forget that many rare conditions are lifelong and some diagnosed during adulthood. I would love to raise more awareness and have more education for our medics on my condition so they know what to look out for and are able to decide the next move for people who are diagnosed. Misdiagnosis of our condition is the main problem and it’s sometimes gone too far by the time it’s found.”

Bernadette meanwhile thanked Mayor Wall and all who helped mark the day: “PKUAI and Rare Disease Ireland would like to extend our sincere thanks to the Mayor of Tralee Johnnie Wall and Kerry County Council for their support of Rare Disease Day 2022”.

A young boy from Tarbert and his family are facing a constant battle trying to access the therapeutic services he badly needs now as a result of his rare genetic condition, his mother said.

Patrick O’Donnell was diagnosed with the extremely rare condition known as ‘Kleefstra syndrome’ or Ks for short.

Kleefstra syndrome (Ks) is a rare genetic chromosomal disorder to be precise, that is characterised by intellectual disability and autism, and is often accompanied by a spectrum of complex physical and clinical features.

The predominant cause of KS is a tiny piece missing (known as a deletion) from near the end of chromosome 9.

One of Patrick’s most pressing requirements is speech and language therapy, but it’s a battle accessing it, mom Sandra told The Kerryman.

“The greatest challenge for managing our son Patrick’s condition is accessing services, even prior to Covid. This directly affects his long term clinical outcome,” Sandra said.

“We are currently waiting two years for speech and language and in most cases we often end up educating healthcare professionals about Patrick’s condition. It is a constant uphill battle. I am delighted to help raise awareness and support fellow rare families on Rare Disease Day.”