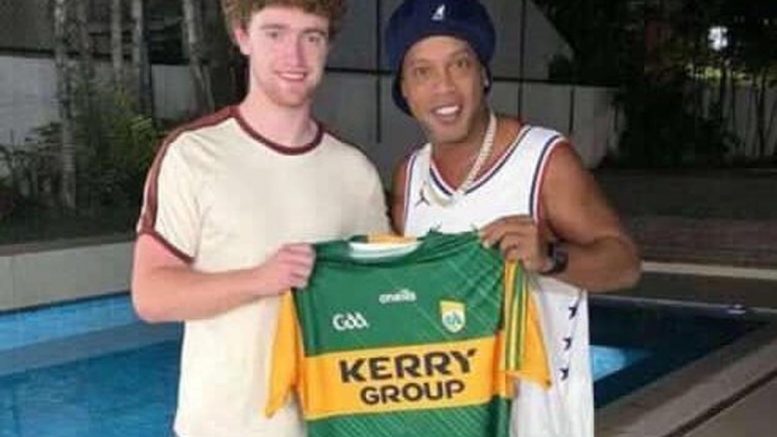 You just never know where a Kerry jersey will pop up next whether it’s at the Masters in Augusta or at Euro 2020,  but we imagine that absolutely no-one expected that it would turn up in a photo with Brazilian footballing legend Ronaldinho, but this is exactly what transpired this week.

photo has been doing the rounds the last day or two of Kerry’s own 2018 Minor Footballer of the Year, Paul Walsh – a Brosna native – standing alongside the now 41-year-old World Cup and Champions League winner, Ronaldinho, to whom Walsh presented the famous green and gold jersey to.

It hasn’t been confirmed yet as to how the unlikely pair first got in contact, but the photo was apparently taken at the footballing great’s home in Rio De Janeiro. Rumours on social media suggest that the young Kerry star struck up a friendship with Ronaldinho’s brother through Instagram and that an invite to Brazil followed from there.

Furthermore, a video is now also out online showing the the pair playing a game of ‘keepy uppys’ and it’s clear to see that the Brazilian has lost none of his skill despite his retirement from the game.

A nice back up to have on the bench against Tyrone perhaps?

In Pictures: Fun for all at Ballyheigue parade