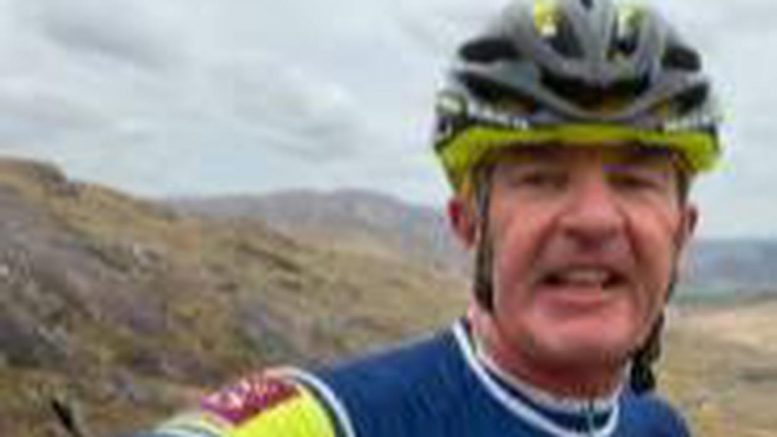 It’s a long way from Derry to Cork city no matter how you’re travelling or what route you take, but when you opt for the most scenic and coastal route possible, on your bike, via Mallin and Mizen Heads, the journey takes on a much tougher complexion if such a thing were needed.

ut that’s what Kenmare Cycling Club Treasurer Fenton Curley – who paired up with cyclist and friend, Annemiek Stegehuis, for the challenge – completed last weekend having set off on July 8 for the TransAtlanticWay (TAW) 2021 Bike Ride, much to the delight of his club and the FC Group of Companies he owns.

Fenton and Annemiek completed the unsupported 2,422.5-kilometre cycle along the Wild Atlantic Way on Saturday. A spokesperson for the FC Group of Companies, speaking on Fenton’s behalf, explained to The Kerryman that Fenton entered the race in November of last year and has worked tirelessly towards this goal.

“Fenton entered the race in November 2020,” she said. “He has been training since and been working with a cycling coach, who has been monitoring the training and setting the weekly schedules.

“A combination of interval work for strength and long rides for endurance is needed for this course because, as well as being a long distance, it also has a huge amount of climbing on steep terrain in Donegal, Kerry and Cork.

“During this time, he covered 12,000 kilometres and 120,000 metres of climbing. He also spent an hour a day on strength and core work. This was combined with a new diet and losing five kilogrammes in weight, which would have a significant advantage on the climbing.”

She explained that a podcast addressing a previous staging of the cycle inspired Fenton to take on the challenge, and while his primary goal was to finish, participating cyclists do aim to finish the course in as fast a time as possible. The course he took on was the longer of two options, and his time of just over nine days and 14 hours was the 11th fastest among the cyclists who took on the longer route.

“What is key is not to go too hard in the first two days,” she said. “Every year, 20 per cent of participants do not make it out of Donegal. Fenton’s plan was to take it steady for the first couple of days then start pushing from there.

“Key is food and hydration, so there was a strict plan for intake covering 6,000 calories per day together with recovery after the race, within 20 minutes, of at least 70 grams of carbs and 10 grams of protein…This is combined with proper rest every night in a B&B where at least five hours’ sleep is required to be able to recover,” she said.

One week in, he crossed to Tarbert via ferry and entered the Kingdom, and given that he lives in Kenmare, the route through Kerry and into Cork city was familiar. Indeed, Kenmare was among the towns he passed through as he neared the finish line.

“Fenton felt strong throughout the race and got stronger as it progressed. After day three, the body adjusts to the extreme activity and compensates accordingly,” his spokesperson said. “Thanks to all Fenton’s cycling buddies in Ghana and Cyprus on the journey and to everyone, together with those people that have kept him in good shape and away from injury, it is all much appreciated!”

Fenton has also thanked all those who offered messages of support throughout.

Is education a privilege? ‘I did the maths and realised I couldn’t afford to pay rent and go to college’