Katie Taylor has beaten Delfine Persoon via a unanimous decision on Saturday night.

The result means Taylor remains the undisputed lightweight champion of the world and it’s her 16th consecutive victory as a pro fighter.

The Belgian took Taylor to the brink in Madison Square Garden in June of last year, finishing on the wrong end of a majority decision in a bout to find the undisputed lightweight champion of the world when many observers felt that Persoon was hard done by. Persoon has labelled the Irish Olympic champion a paper champion and overrated and, while Matchroom promoter Eddie Hearn has spoken about a ‘fuming’ Taylor.

However, before the fight on Saturday, Taylor had come across as unperturbed by the jibes ahead of the rematch.

Saturday’s comprehensive win puts the issue to bed and sets Taylor up with a potential rematch with Jess McCaskill, who defeated the Irish boxer in 2017. There haver also been reports of a potential fight with Peurto Rican Amanda Serrano. 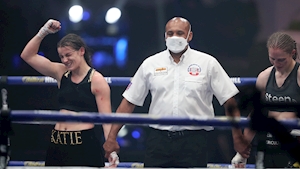