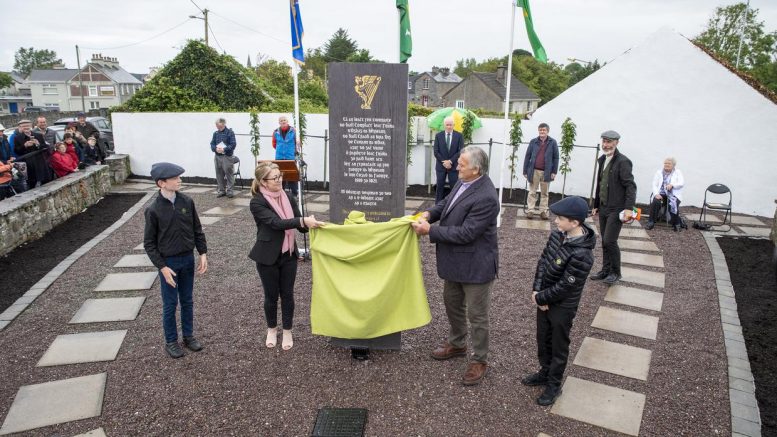 At 12 noon on Sunday, exactly 100 years to the day of the Truce between Crown Forces and the Irish Volunteers, the village of Lixnaw paid homage to the men and women from the locality who contributed to the fight for Irish Independence.

he sizeable crowd was not put off by the inclement conditions as they listened to various keynote speakers, many of them relatives of the Lixnaw Company IRA and the Irrebeg Cumann na mBan.

Lixnaw suffered at the hands of the Black and Tans, especially through the burning of the local creamery in 1920 and the brutal death of volunteer and Lixnaw resident Liam ‘Sonny’ McCarthy in March 1921.

Sonny took part in an ambush near his home in July 1920 and was part of a Lixnaw Company that comprised of 122 members at the time of the truce, including 22 women who formed part of the Irrebeg Cumman na mBan.

Sunday’s unveiling took place in Lixnaw’s ‘Volunteer Park’ in the Garden of Remembrance. This area now stands as a fitting tribute to the determination of the people of Lixnaw to achieve self-rule in Ireland.

Lixnaw Development Association is behind the initiative, and its Chairman Dick McElligott said, as there was no plaque prior to Sunday, it makes its presence all the more significant for the community.

“The Sonny McCarthy plaque [erected earlier this year] was probably the first. But there was nothing officially done to recognise and remember these men and women probably since 1932, when a high cross was placed on the grave of Sonny McCarthy. That makes this plaque all the more important,” Dick said. A minute’s silence took place before Sonny Egan sang ‘The Ballad of Sonny McCarthy’ and speakers Martin Moore, Jimmy Deenihan, Alice Molyneaux (who recited the ‘Soldiers of Cumman na mBan’), Patrick Lyons, Dick McElligott and Tim Horgan had their say.

Each speaker gave a detailed overview of the turbulent times by providing an historical context as to why the monument is so important to Lixnaw’s story.

Once the speeches concluded, the monument was officially unveiled by the grandson of Captain Patrick Lyons (also Patrick Lyons) and Noelle Cronin on behalf of her grandmother, Captain Bridie Cronin of the Irrebeg Cumman na mBan.

The ceremony concluded with a rendition of Amhrán na bhFiann by Sonny Egan, whose two uncles, Tim and Pat, were both Volunteers in North Kerry.

Kerry Hospice in need of artists for Christmas card fundraiser