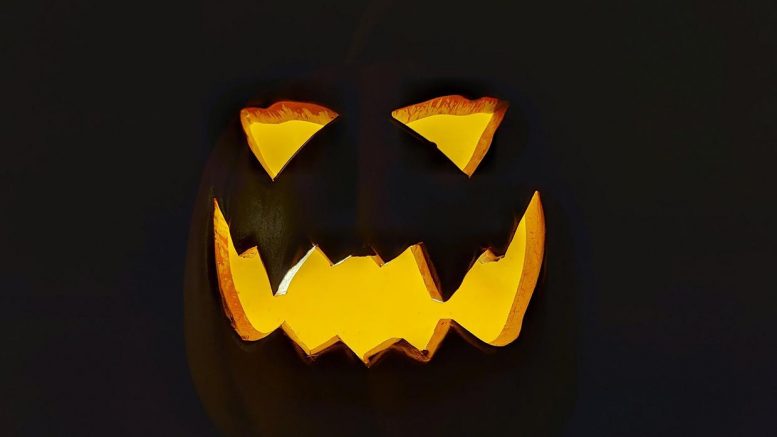 At what point did the familiar ‘something for Halloween?’ give way to ‘Trick or Treat?’ at the doorway of homes every October 31st?

ver 300 years since our descendants introduced All Hollows Eve to North America, it has been repackaged and resold to us as an American-themed holiday, which is no bad thing just as long as we remain loyal to its origins.

Heavy commercialism has taken the high ground on the humble festival of our past; a past when carved swedes (the vegetable, that is) functioned as pumpkins, and fists of copper coins substituted for sweets, or dare I say, ‘candy’.

Everyone knows the Irish and their Celtic cousins carried variants of the festival of Samhain (summer’s end) to North America between the 1600s and 1800s. These same settlers ascribed alternate meanings of the ‘other world’ and introduced aberrations to a divine Christian view of life and death.

It’s estimated that between 1825 and 1854 over one million Irish, not including the migration of Scots-Irish in the 18th century, arrived in America.

Not only did they bring the pagan custom of Samhain, but also fresh tales of human catastrophe in the aftermath of the famine years, augmenting belief in the other world and the supremacy of death.

The Celts also understood the significance of translating equivalence with the passing of human life and the landscapes that sustained and nourished it.

Over the centuries, many other forms of tradition have been grafted to Halloween, integrating its harvest aspect along with nature, life, and death.

An example of the juxtaposition between Christianity and paganism is found in the eighth century when Pope Gregory III fixed November 1 as All Hollows Day (All Saints Day). This made October 31 All Hollows Eve.

But remembering dead saints was not enough for the people, who, predominately of the Catholic faith, retained their tradition of venerating all the dead when the barrier between the spirit world and the corporeal world was at its weakest.

It can be viewed as an audacious move by a peasantry who knew there was no discrimination in death. Death was, and still is, the great leveller of social class, even from beyond the grave.

By the 19th century the Church had officially sanctified the honouring of the dead on All Hollows Eve. This is the time when the metamorphosis to ghosts, goblins, witches, mummies, and whatever else you can think of as unseemly, commenced its journey to the present.

Like Christmas, Halloween is all about children. But children come in all ages, and I dare any adult not to connect with the memories of their childhood Halloween this weekend.

Looking back, Halloween of yesteryear was penury compared with the lavish costumes and treat-giving that children expect today.

Prior to the bourgeois period of the late 1990s, a black bin bag, a cheap plastic mask, and a smearing of coal dust was the only wardrobe available to children. I recall anarchy on one Halloween when bin bags only came in a silvery grey colour. Black was restored the following year, and all seemed right with the world again.

That first pinch of twilight on Halloween never failed to spark a satisfying sense of childish uncertainty in us. The sight and smell of fresh barmbrack lining the shelves of Barry’s Bakery is long gone but never forgotten. Neither will the combination of chimney smoke and crisp autumnal air burning the respiratory system on Halloween night be allowed escape recollection.

Expectations vary whenever children set out on their door-to-door excursion at Halloween. For us, it was about collecting spare change. Traditionally, Halloween was known as ‘beggar’s night’. Fruit and nuts were welcome, but money was the currency that mattered.

The fruits of our labour would later be spent at the counter of the Green Rooster Takeaway. Stacks of coins – tallied with an accountant’s diligence – gave us our earliest taste of spending power.

What made the prelude to Halloween even more thrilling was the stories told by our elders. The Púca (ghost/spirit) is a multi-tasker in Irish folklore, a shape shifter in every sense.

The Púca, it is said, can take the form of any animal, adding its piercing green eyes for extra fear. More a custodian of rural Ireland, this didn’t prevent my grandfather from placing the Púca at the centre of our urban world every October.

My grandfather’s version of the Púca’s timetable is that once it finished tarnishing all the berries on the hedgerows in the surrounding countryside, it roamed the streets of nearby towns.

It would be a lie to say we didn’t catch a glimpse of the Púca at least once during those dim and distant evenings…or so it seemed.

The seamless way in which rural ghosts become urban ghosts, on a whim, is the craft of Halloween storytelling. It happens only if the seeds of imagination are sown in time.

Our neighbour once told us of a seventeenth-century carriage carried by headless horses and driven by a headless driver that made its way through our street at midnight on Halloween.

We never could wait up late enough to see if it were true, and by the time we could, we didn’t much care if it passed our street or not. Still, the story produced enough fear in us to turn deception into truth in a way that mattered, and still does.

Imagination is Halloween’s main supply. Without a willingness to rotate one’s mind between fact and fiction on Halloween is to miss the innocent awe and lofty excitement of childhood.

A letter writer to The Kerryman in October 1924 wrote the following of Halloween: “It bestows a gift of calling spirits from a vasty deep which becomes available to all who choose to avail themselves of the privileges of the occasion”.

This, I feel, underpins the need to keep Halloween a time of respite from the tedious rituals of life.

Cheating reality through disguise is all part of the art of Halloween. Here, it’s impossible not to draw parallels between Halloween and social media – the other ‘other world’. Representations of who we want to be, as opposed to who we are, is often what drives the ravenous migration of people online.

The occasional desire to be something other than what we are in our day-to-day lives is precisely the role Halloween was intended to fulfil. Even trolls have transfigured into something more sinister than folklore intended!

It’s thought the earliest recorded reference to a jack-o’-lantern in Ireland – a carved turnip or swede – is in the mid-1700s. The ritual, I’m sure, is many times older than the date suggests. When the idea was brought by the Irish to America, the pumpkin found a new use. It’s worth keeping this in mind when carving your pumpkin this weekend.

Lastly, while many denounce the Americanised Halloween for its nod to consumerism and veiled threat to the ancient traditions of Samhain, one can’t deny Halloween is more spectacular, colourful, and plentiful these days.

The Americanised version can never eclipse the Halloween of our childhood, but it’s nice to have it home all the same…back where it all started.

Kerry man’s memories of meeting Pelé – ‘he was a lovely, lovely man and a very humble person’