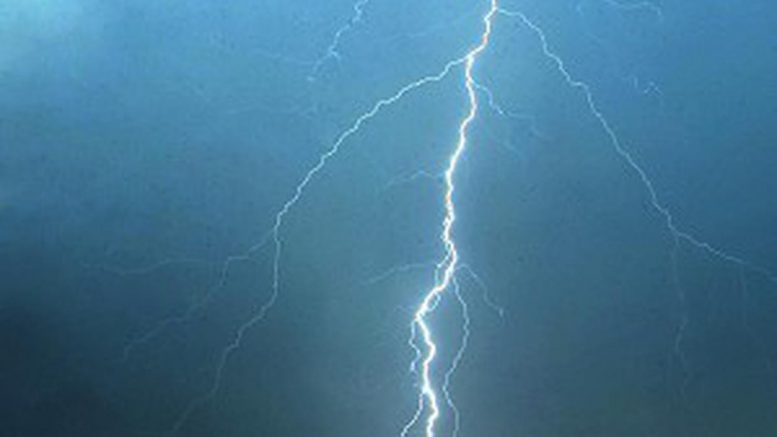 A sinister side effect of the recent fine weather occurred at Tarbert on Friday last when a bolt of lightning caused damage to some buildings and resulted in petrol pumps at Dunnes Gala Store being out of action for several hours.

he lightning struck at around 7.30pm during a thunderstorm and proved a frightening experience for those who witnessed it. Thankfully, no one was injured in the strike and only minor disruption was caused.

However, locals were given a stark reminder of the dangers associated with extreme weather conditions. Amy Carmody was working at Dunnes Gala when she saw a bright flash and heard a loud bang.

“I didn’t know what it was at the time. There was just this huge flash up close to me,” Amy said.

“The power stayed on, but it knocked out our connection to the pumps and the broadband. We couldn’t take any card payments. The bang was something [like] I’d never heard before.”

Amy explains that the way in which the lightning struck could have had much worse results.

“If someone was in the wrong place it could have killed them. Even a fire [could have happened]. We are very lucky in that sense.

“We’re happy in one way that it only stopped us from working for a while and that nothing exploded. It was extreme and frightening,” Amy said.

Electrical sockets were blown from the wall in one house, while security cameras were also damaged at nearby St Brendan’s Church.

Sacristan James Lavery was inside the church at the time of the thunderstorm when he heard a loud explosion.

“It knocked out the camera system. I’ve never seen anything like this happen before,” said James.

“I think a lot of houses close by had stuff damaged as well.

“I was in the church when it happened, when I heard a loud explosion. The technicians will be working on the damage this week to get it up and running again,” he said.

Met Éireann did issue a yellow thunderstorm alert for Friday last, with a line of counties stretching from Tipperary, Limerick and Clare reporting high levels of lightning activity.

Lightning is caused when the surface heats the air above it, and as the air rises to form vapour, it cools. The clouds fill with electrical particles that produce lighting when positive and negative charges within the cloud become too great.

Despite the return of heavy rain on Monday, Kerry enjoyed a scorching nine days that saw temperatures reach the high 20s.

This also produced a rare sequence of ‘tropical nights’ as temperatures did not drop below 20 degrees during two nights last week.