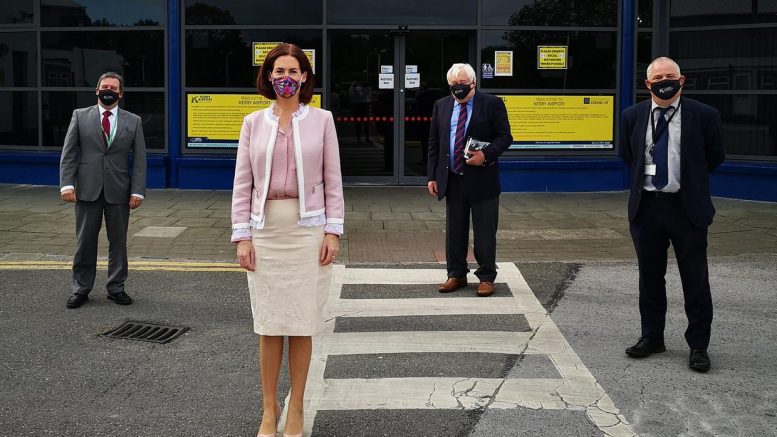 Flights between Kerry and Dublin are expected to fully resume by mid July according to the Department of Transport, which has launched a ‘fast track’ process to find a replacement for Stobart Air.

ast Saturday’s abrupt closure of the airline, which operated under the Aer Lingus Regional banner, led to the cancellation of flights on 12 routes including the Government Public Service Obligation subsidy (PSO) supported Kerry-Dublin service.

While Aer Lingus have been able to find temporary replacement carriers to operate most of the affected routes, the existence of PSO contracts on the Kerry and Donegal to Dublin services meant – due to EU procurement rules – that this was not possible on these routes.

Given the importance of restoring full connectivity on the Kerry and Donegal routes, Transport Minister Eamon Ryan has now triggered a clause in EU legislation that will allow replacement carriers to be hired on a temporary basis.

EU regulations permit the Government to agree short-term contracts – for a maximum of seven months – to cover gaps in service before finalising a full, four-year PSO contract.

With new PSO contracts for Kerry and Donegal due to come into effect by the end of January 2021, the seven-month window is enough to cover the entire period until the current PSO contract with Stobart/Aer Lingus Regional (agreed in 2018) expires.

However, even the ‘fast track’ process will take several weeks, and Minister Ryan said it will be, at least, mid July before full air services between Kerry and Dublin resume.

So far, Estonian state airline Nordica and carriers from Norway and Lithuania have expressed interest in operating the Kerry and Donegal routes.

Minister Ryan will formally approach all interested airlines in the next week, after which, the Green Party leader said, a “judgement call” will be made on the most suitable candidate. Minister Ryan said he would expect the replacement carrier to have full services in place by mid July.

Kerry Airport CEO John Mulhern has said he is very confident the Public Service Obligation route will resume soon and that he has been in contact with at least one international airline that is ready and able to operate the Kerry-Dublin service.

Mr Mulhern, who described the closure of Stobart Air as a “most unfortunate development” expressed his sympathies to the now defunct airline’s 480 former employees: “Sincerely, the team at Kerry Airport and I send our most heartfelt empathy to all our friends and colleagues at Stobart today. The airline has been a most valued and respected partner to Kerry Airport for several years and managed our Dublin flights with great professionalism and customer care. Our thoughts are with all of you,” he said.

“Kerry Airport will navigate this period with all the strength and resourcefulness it has demonstrated during the last year of COVID uncertainty and on several occasions in its history,” Mr Mulhern said.

Kerry Fiann Fáil TD and Education Minister Norma Foley welcomed news that the sourcing of a replacement carrier has been fast tracked.

“The restoration of our regional connectivity is of critical importance to the people of Kerry. Transport Minister Eamon Ryan confirmed to me his intentions to seek an expedited tendering process which aims to have a replacement carrier in place by mid-end of July,” said Minister Foley.

Mayor of Kerry Cllr Patrick O’Connor Scarteen said it is imperative that full services on the route are restored as soon as possible to ensure business connectivity and to provide for potential holiday makers who are making plans for the summer.

“It is essential that we have air connectivity with Dublin,” he said.

“In terms of tourism, this needs to be resolved as soon as possible. People are starting to put plans in place, and the summer is already slipping away,” he said.

“Connectivity and transport is the lifeblood to rebuilding tourism. The Government can save vital tourism and businesses connectivity by moving swiftly and confidently appointing a replacement to service these crucial routes,” he said.