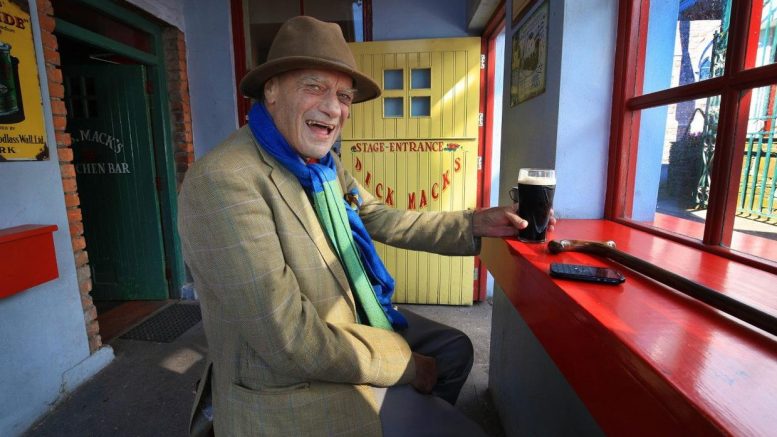 Fair to say, there’ll never be another bar man remotely like Oliver J Mac Donnell. It fell to his daughter, Katie, today to describe what most would have thought indescribable at his Funeral Mass – but she came as near as anyone could while delivering an emotional, touching Eulogy to a character, her dad.

Oliver Mac’ died on Saturday, peacefully, surrounded by family. After what has been a long goodbye, his Funeral took place in St Mary’s Church on Green Street, Dingle, directly across from the bar that has been in his family’s name for well in excess of a century. Dick Mack’s is famous even in a town famous for its watering holes, and Oliver – plus his dapper taste in clothing – was key to the charm of a pub as unique as he was.

“He had a presence and a smile that drew people to him and made him the best bar man,” Katie said at the Ambo, metres from where one of her dad’s trademark hats sat on his coffin.

“Renowned for his style, a man that could pull off any colour and make it look classy,” she said. “A rogue, a character, a visionary that had ideas that were ahead of his time. I’ll treasure our drives and days having ice cream in the sun – or the rain.”

Oliver loved Dingle, but he passed away at his residence in Tralee last weekend. There were several reasons for his move to the county capital, but chief among these was the dialysis treatment he needed in recent years.

This treatment, Katie said, gave them “precious extra years” with her dad.

“I want to thank every single health-care person who helped mom, Martin [her partner], and I care for dad while he was in Tralee, and the care and attention he received was second to none,” she said. “Particularly Dr Arthurs, who saw he was improving in Tralee and got him on the dialysis list three years ago. Without him, these precious extra years would never have happened.” There was thanks, too, for the dialysis team itself.

The family asked that donations – in lieu of flowers – be made, if desired, to the Irish Kidney Association or the Daffodil Foundation. The latter, Katie said, had made Oliver’s last moments “as comfortable and peaceful as possible, at home”.

To his final days, he remained glued to his iPad and its Spotify account, blaring out tunes by the great many acts he loved: Jim Reeves, The Rat Pack, The Dubliners, Dolly Parton, Elvis, more. The last thing Katie heard her dad say clearly came in response to her asking if the music was okay for him: “Turn it up”.

“He passed on his love of all animals to [daughters] Olivia, Jessica, and I. He always had a grá for his cats, dogs, and cattle were always close to his heart. I’m sure Daisy will again be at the corner of his bed in the sky, waiting for him.

“While in Tralee, he loved seeing the young foals, visiting them with Martin often,” she said, recalling also the “deep chat” he had with late Derby winner Galileo on a visit to Coolmore Stud.

“Our days will feel emptier without you, Dad. I know you’ll look down on us and mind us. We love you, and we will meet again. Keep me a seat, wherever you are, and we’ll have good times and ice cream again.”