Fair City has trended across social media in Ireland as the soap made a return to television screens this evening.

RTÉ confirmed in early August that new episodes of the long-running series would be back this month, with viewers seeing new stories and dramas unfold as the programme reflects life in Ireland with Covid-19.

Tonight’s episode saw Pete learn Seán will not be continuing his lockdown dance classes, while Bob received a worrying phone call. Dolores also noticed the bond Bronagh and Will forged over the pandemic, while Doug and Erica’s co-habitation proved to be a struggle.

Pete learns Seán won’t be continuing his lockdown dance classes.
A worrying phone call leaves Bob speechless.
Dolores notices the bond Bronagh and Will have forged over the pandemic.
Doug and Erica’s co-habitation proves to have been a struggle.#FairCity 8:00pm @RTEOne pic.twitter.com/Jy1fr9qqi3

Production on the show halted in March as the pandemic reached Ireland, however, cast and crew have now returned to Carrigstown in line with HSE and Government guidelines.

Production has resumed in line with new safety procedures to prevent the spread of Covid-19, to the delight of many viewers.

I just loved that episode of #faircity, superb episode by Carmel, it’s so wonderful to have it back. Well done to everyone for getting it back on screen. Brilliant stuff.

Announcing the show’s return, series producer Brigie DeCourcy said: “Everyone is delighted that we are now in a position to get back to telling stories and bringing fun and chaos back to Carrigstown.”

“We have been eager to get back to production, but the priority was the health and safety of the whole team.” 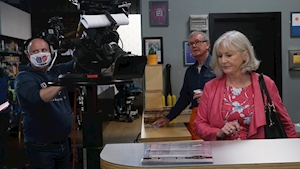